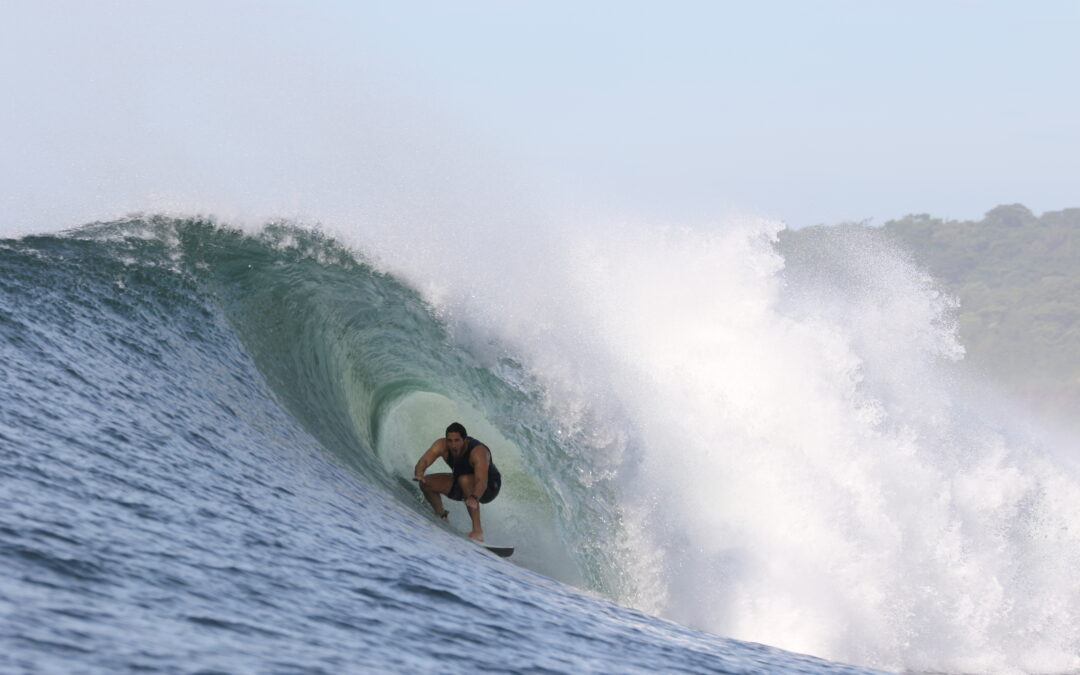 El Salvador had been on lockdown for months now and the airport had just announced the re-aperture for Oct 19. Our buddies Benjamin Malin and Jon Macik were anxious to come surf El Salvador – It had been over a year since their last surf trip down here, the waves had been firing lately and no one was surfing them. They booked their tickets for Oct 20th and the plan was to go surf Punta Mangos for the swell that was on its way. I never really had any expectations – I mean, I was sure it was going to be good as it usually is in El Salvador, but what I was looking forward to was the empty lineups that COVID19 had left the country with. 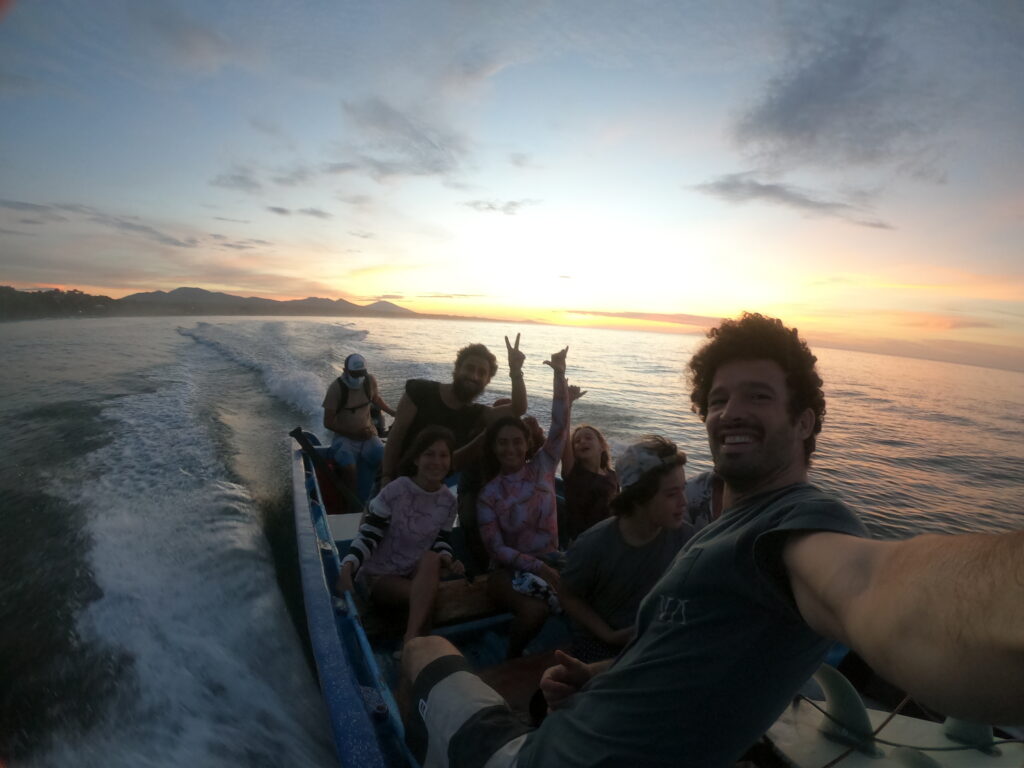 On the way to Punta Mango

We took off Monday evening, from El Zonte, La Libertad, together with another group of friends that arrived from Florida Aliette, Orlando, and Gaudi (Flips friend) and checked in at Papaya Lodge. We set up the boat ride for the next morning, spoke to the photographers and videographers and agreed to meet at 4:45 am by the beach. Had dinner and drank a few Pilsener’s – that happened to be warm so no more than three. Lol – They were pretty bad but we blamed Eddie for it.

Woke up the next morning and got everybody together. We made it out into the ocean pretty easily – the swell didn’t necessarily look that big. Saw the sunrise on the way to Mangos. When we got there I remember seeing a wave that came in that looked beautiful – a peeling right hand barrel from start to finish, but thought nothing of it. Set up the boards, put on sunscreen, got the gopro ready and in the water we went. 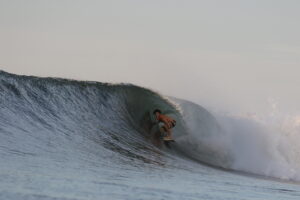 First wave of the day

First wave I caught was a super fun little barrel – I was in there for maybe 2 seconds and came right out and I said “wow that was good!”. Paddled back out and kept surfing. 40 minutes into the session I had gotten 6 waves – all barrels. I started to realize – Holy shit! It is fucking firing out here. Nobody out and everyone in the group catching clean waves and most were getting barreled! Literally every time someone was on a wave it was all stoke and pure joy – screaming out of excitement from surfing. Orlando took a big one all the way in and on the way back out he was crying! 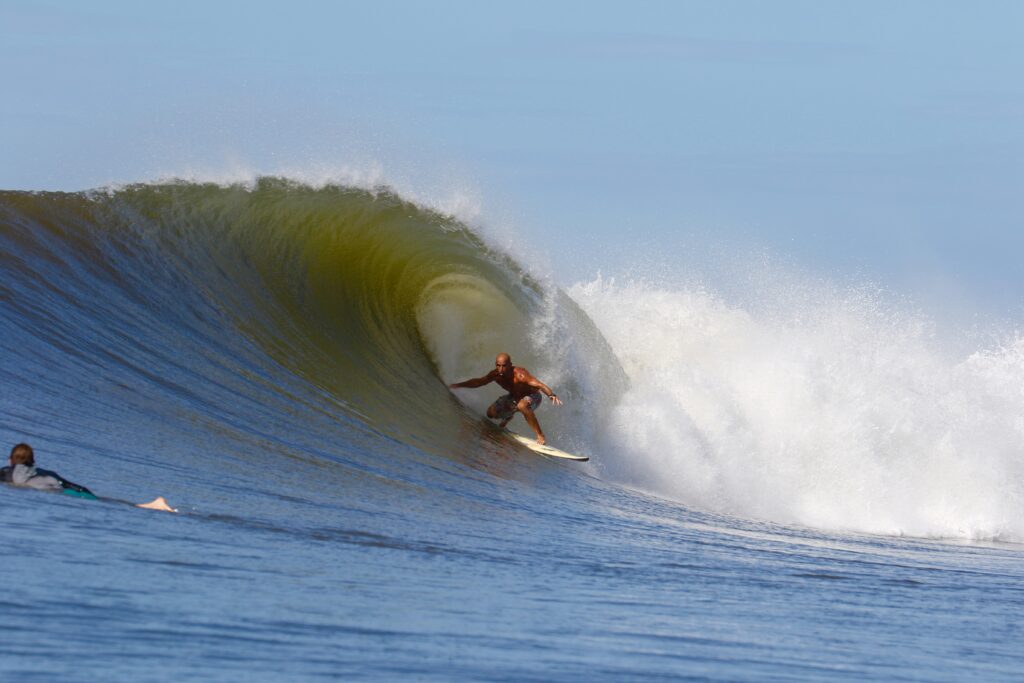 Iggy on a bomb

Two hours later, still surfing, I paddled to the boat to have a drink of water and a peanut butter and jelly sandwich. I wasn’t even on the boat and the photographer just puts the camera in my face and screams “look at this wave!”. It was Benjamin on a screaming barrel! Completely covered and deep. “I got the whole sequence on this wave” he said. He was super stoked. I couldn’t wait to see all the footage from the session. Paddled back out and surfed for another hour and a half. It was still glassy , tide was coming in , and the waves were pumping! What a session. At some point I thought “life could end right now and I would be content.” It had truly become a session of a lifetime, a session for the books. Straight out of covid and strict lockdown. Nobody out but our group of friends. You could only see smiles on everyone’s faces. Thank you life! Thank you surfing! Thank you Punta Mangos! Thank you El Salvador! 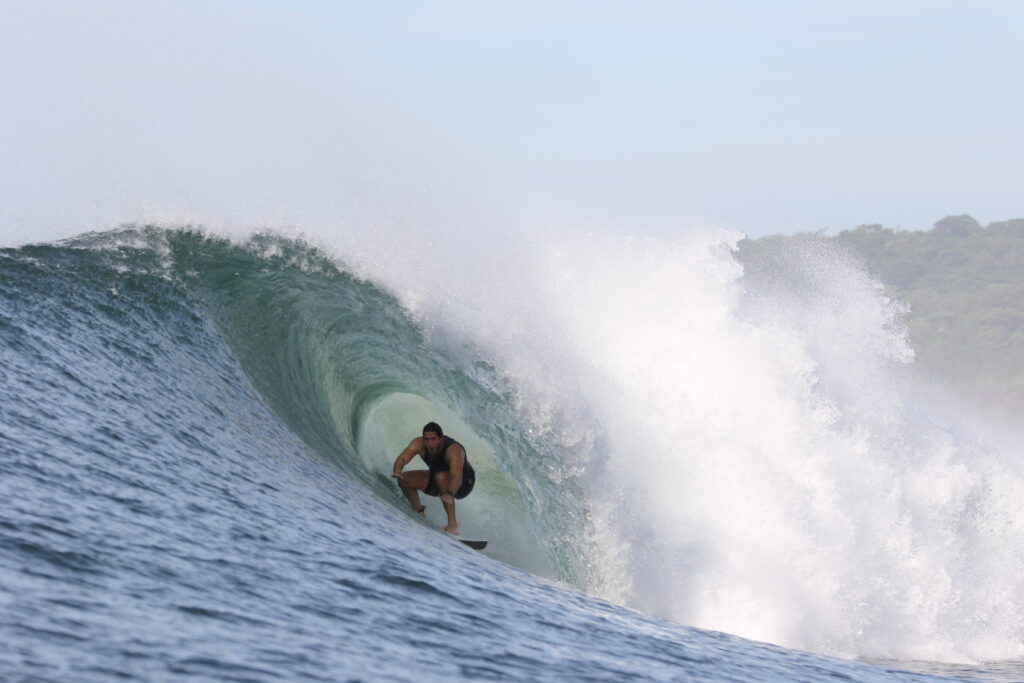 Beni on a screamer 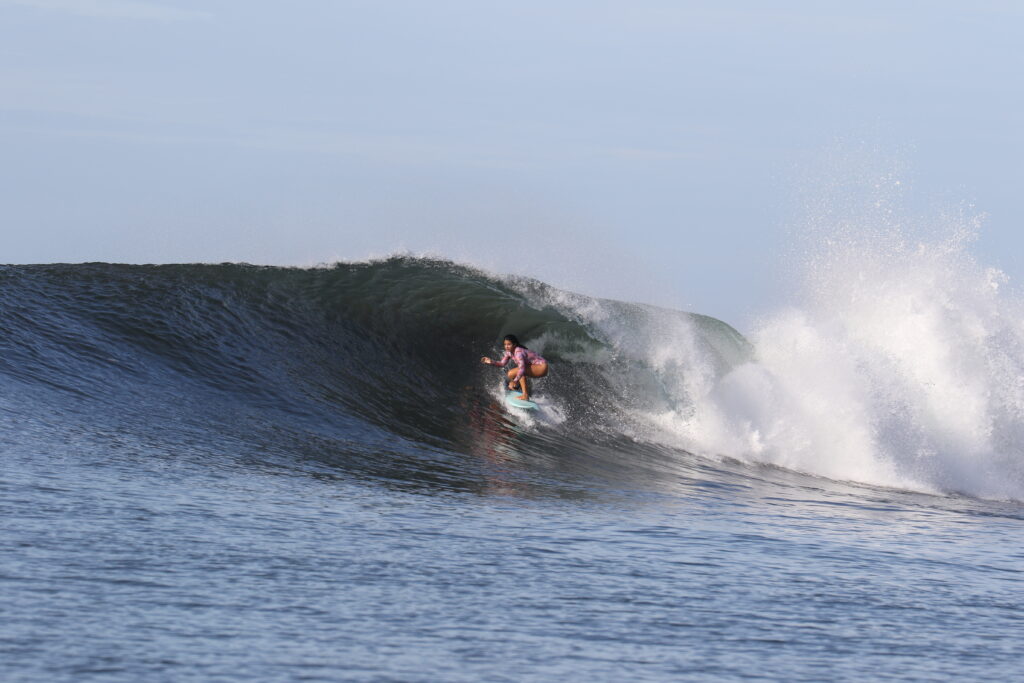 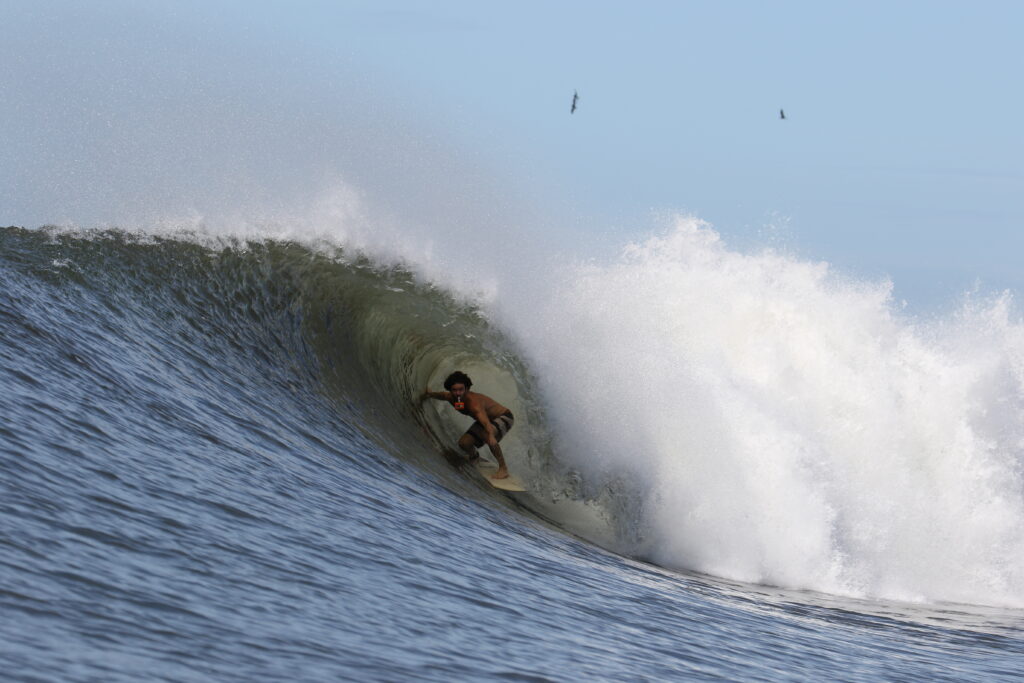 On the way back everybody was pretty quiet and tranquil. We were still processing what had just happened. I don’t think the group realized at that moment how legendary that surf session had been. My mind was absolutely blown away! When we got back to the hotel we watched the footage over breakfast. It was such an epic moment – everybody frothing at everyone’s photos. Screaming yeah! Sick! Epic! Just about any word related to excitement. We were all ultra stoked! The sickest barrel shots and waves. Everybody – I mean everybody got barreled and caught amazing waves. 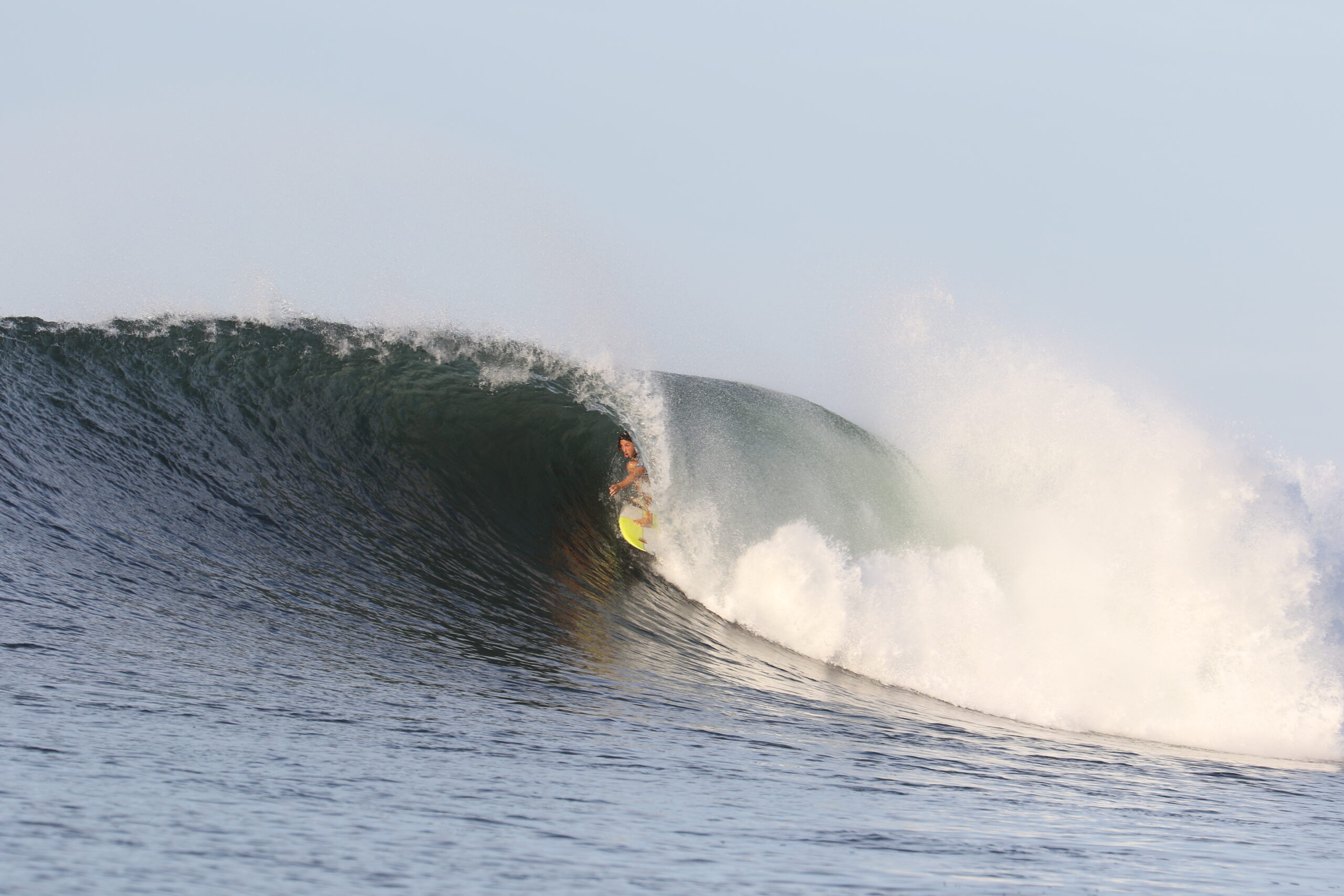 Flip looking for his exit